Development of a Heating Controller System

This section describes an Event-B development of a simple heating controller. This is the first case study to cover the entire development process; starting from a system specification and ending up with implementable Ada code. The development process starts with an abstract specification followed by two successive refinements, we then decompose the model into two separate sub-models representing the environment and the rest of the system. The refinement process continues after the first decomposition in order to arrive at a concrete level suitable for implementation. This allows us to derive the appropriate tasking structure that is needed by the code generation plug-in. The second decomposition gives rise to a number of tasking machines, plus a specific type of machine for representing protected shared data. This protected shared data facilitating communications between tasking machines. Then we illustrate how, using the code generation plug-in, a concurrent Ada implementation is generated. The overall aim of this case study is to put in practice the recommended methodological aspects of Event-B, particularly those aspects of modelling concerned with decomposition and code generation. 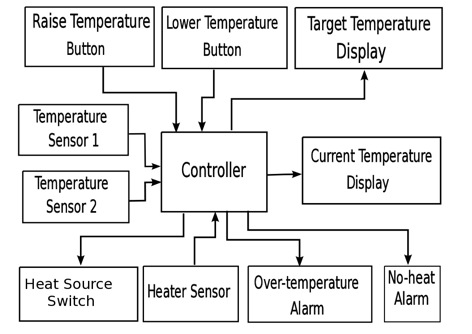 Main Functionality of the System

An Overview of the System Development

Before discussing Event-B models the Heater Controller in more detail, it is useful to provide an overview of the development approach. In this section we demonstrate this with a diagram. Starting from the top level of the diagram, it shows the most abstract model of the system or as it know as the system specification. In this stage we have specified the main system’s functionality. This includes events for modelling increase/decrease target temperature, polling the environment temperature using two available sensors, calculating current temperature, turning on/off the heat source, and finally activating or deactivating two different alarms should it deemed to be necessary by the controller. Events in this stage are deliberately simple to achieve maximum comprehensibility. Events ordering and iteration is introduced in the later stages. 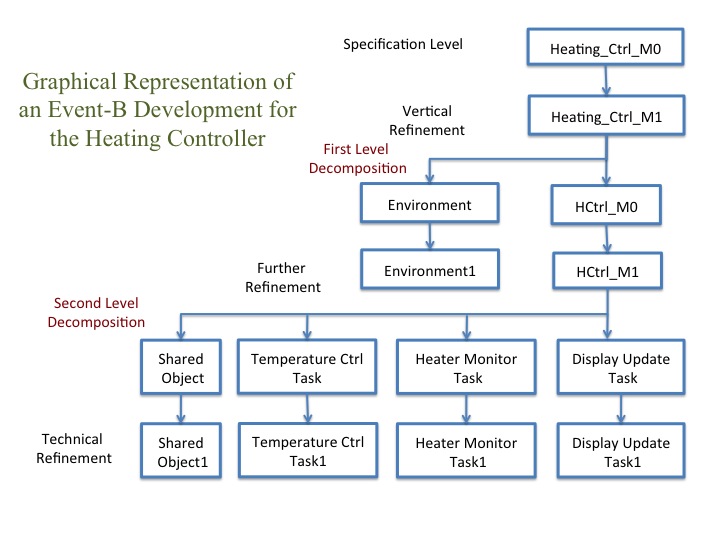 In the first refinement level we introduce sensing and actuation which are considered as design steps. Here sensing involves polling the state of increase/decrease buttons, temperature sensors, and the heater sensor. Actuation concerns the update of target and current temperature displays with latest values, as well as sending outcomes of controller decisions to appropriate actuators such as heat on/off, and various alarms.

As illustrated in the system development diagram we decompose our model in two stages. In the first stage we separate the controller, the part of the system that should be implemented, from its surrounding environment. The second stage of decomposition is concerned with the tasking structure of the implementable system. This an open issue for the designer and it is based on his/her personal choice as well as targeted platform and possible options available to him/her.

In Event-B usually we start modelling with specifying the whole system as a closed system. This includes the system that we are intending to develop plus its surrounding environment. Therefore when our model of the system becomes big and complex it is reasonable to separate the actual system from its environment. Hence in the first stage of decomposition we decompose our model to two parts, namely the controller and the environment. 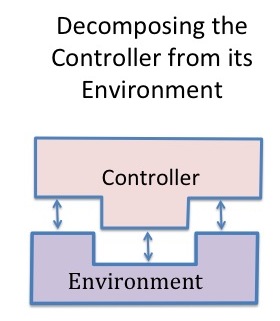 In this stage we decompose the controller to three different tasks which interacting with each other through a shared object. This structure is presented in the following figure. Note that tasks still are able to communicate with the environment directly. In practice the number of the tasks and the way that we distribute different events over these tasks are determined by various factors. Other properties of tasks, such as their priorities, whether they are periodic or not, and the length of each periodic task in millisecond are defined later in the tasking development stage. 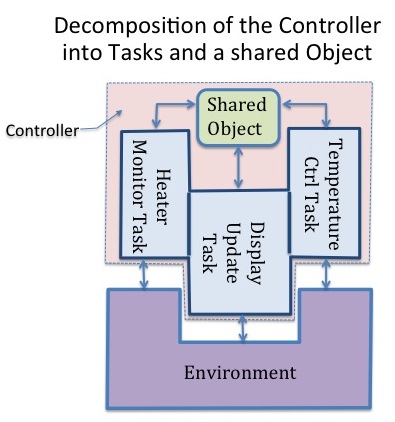 Now that we have fully developed Event-B models that encompass basic structures for tasks we can move to the next stage. This is to generate an executable Ada code for the system using the code generation plug-in. This is the first time that this plug-in explored extensively; therefore we present the next stage in the form of a tutorial.

The Tasking Event-B tutorial starts here. Also a link to an archive file, which includes the complete development, can be found on this page.