Rodin 2.0 with theory feature provides support for developing theories. But sharing theories can be somewhat difficult if care is not taken for exporting and importing them. This is related to the fact that theories are always in a particular project called "MathExtensions". To understand the problem, let's say we have developed an Event-B project P and a theory T and want to make an archive in order to share them. The workspace looks like this:

If we make a standard archive export of these projects (File > Export > Archive File), we will get a zip file containing the project P and the project MathExtensions.

But then, the person who will import the archive into his workspace with the theory feature installed (File > Import > Existing Projects into Workspace > Select archive file), will already have a project named "MathExtensions" in the workspace. Thus, the import wizard will warn that "Some projects cannot be imported because they already exist in the workspace", and theories of "MathExtensions" in the archive will not be imported. This page is dedicated to proposing workarounds for this problem.

When exporting, select option "Create only selected directories", then select project P, but not project MathExtensions, only the T.* files in it, as shown below: 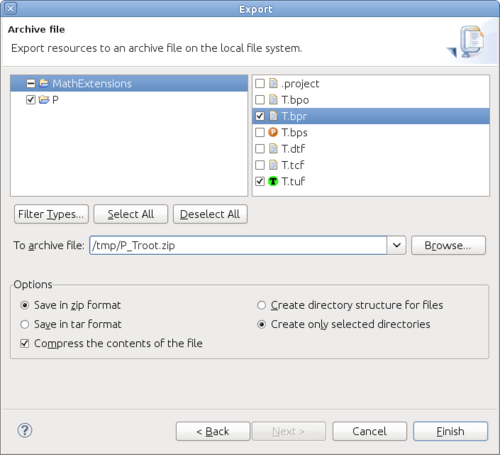 Then, import is done in two steps: 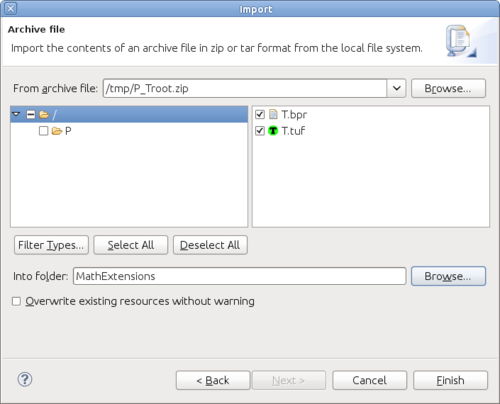 Note: in this case we chose to only put the .tuf (theory unchecked file) and .bpr (proof file) into the archive, because other files (.tcf, .bpo, .bps) are generated upon build, and .dtf (deployed theory file) is generated when deploying T. It is also possible to put every T.* files in the archive, or only T.dtf. In any case, it is generally preferable to clean imported projects and the MathExtensions project.

This solution is the most conservative one, as other theories that might exist in the importing workspace are conserved.

This second solution is the most simple but can be used only when the importer has not developed any theories. It consists in exporting P and T the standard way, so that the archive contains P and MathExtensions projects. Then the importer simply deletes his empty MathExtensions project from the workspace before importing the standard way (File > Import > Existing Projects into Workspace > Select archive file).