We have introduced the ability to generate code from state-machine diagrams, in version 0.2.3 of the code generation feature plug-in. Implementation code is generated from the diagram itself, and no additional mark-up of the model is required; that is, nothing over and above the usual mark-up required for Tasking Event-B, such as identifying non-typing/typing invariants, and guards etc. State-machines are created, using the existing state-machine plug-in, subject to the limitations described below.

Another limitation is that we do not handle nested state-machines, although this should be feasible.

The translation of the diagrammatic elements to code has been hard-coded in the code generation plug-in. We have introduced new types to the translator's common language model (IL1). We add case-statements, and a container for them (analogous to switch) since these are commonly used to implement state-machines. The code generator navigates through each state of a state-machine, generating an internal representation of the state-machine, which is used to create the IL1 model. The IL1 model is then used to generate code for the various target languages that may have been implemented. We have also updated the IL1-to-target code generators, to generate case/switch statements in Ada, C and Java.

Each state-machine has an Enumerated type whose elements take the names of the states. A state variable is created in the target that keeps track of the current state, and has the type of the enumeration. 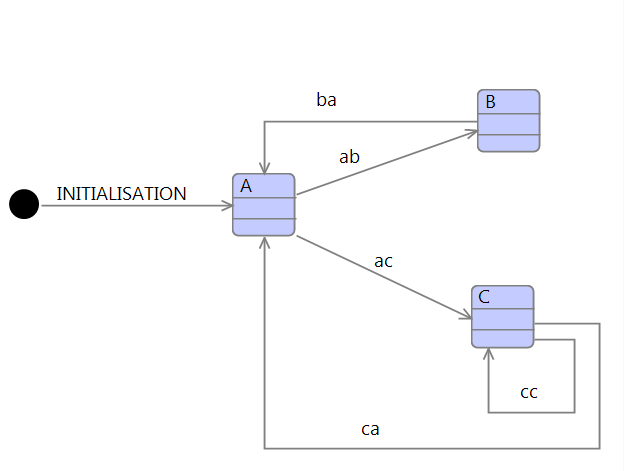 We generate a subroutine that controls the state machine, and implements the actions. In the task body, we add a call the state-machine subroutines once in every execution cycle. Each state in the state machine is related to a case statement in the subroutine. For instance, the Ada code for the diagram in Figure 1 is,

The body can be viewed as a parallel composition of events, made up of all of the outgoing transitions of State A. These events have disjoint and complete guards, so only one of the events will be enabled. The translation of the body gives rise to the following branching statement when translated to Ada,

See all of the Ada code that is generated here.