This tutorial will demonstrate the capabilities and a simple use case scenario of the UML-B Statemachine Animation plug-in that in combination with ProB Animator provides the means of visually verifying a model defined in terms of the UML-B statemachine diagrams.

In this tutorial you will be working with a sample UML-B project that models an ATM. The project consists of several machine refinements and statemachine diagrams, which you will animate using ProB and Statemachine Animation plug-in by following the step-by-step instructions supplemented with the screenshots. After completing the tutorial hopefully you will become familiar with visual statemachine diagram animation and get an idea of its benefits.

The tutorial assumes you have the following installed:

all available from http://www.event-b.org and Rodin Update site.

In addition you will need a sample UML-B project, which is available from here.

Prior to working with the ATM UML-B project let's create a new clean environment i.e. a new Rodin workspace 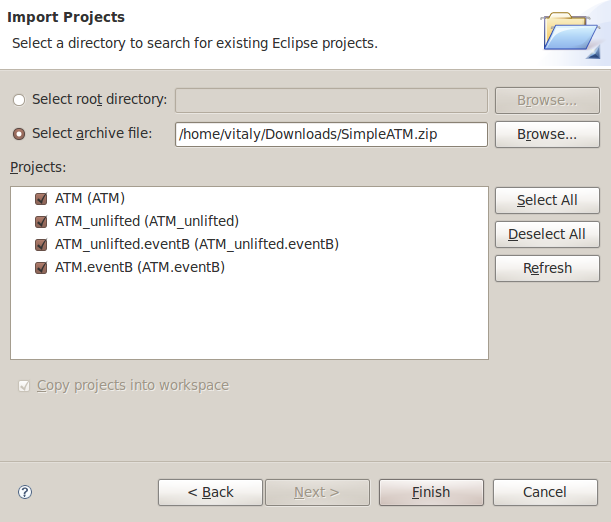 As you can see at this point there are four projects in total, two of which are UML-B projects that are different implementation versions of the ATM model: normal and class-lifted. The other two projects are standard Event-B projects generated from the UML-B. To show the complete functionality of the Statemachine Animation plug-in we will be using a class-lifted version of the ATM UML-B model, named "ATM". You can open open it and have a look at the contained UML-B diagrams.

First let's open the abstract UML-B class diagram ATM.ATM_A.classDiag which consists of a single class C that represents an ATM and contains atm_sm statemachine. You can see from here that statemachine is class-lifted - it belongs to a class. This will affect the UML-B to Event-B translation and final Event-B model in a sense that there will be a type C generated for instances of that class. 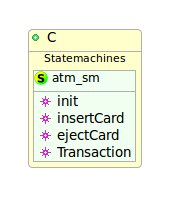 Now let's open atm_sm statemachine diagram before animating it. This can be done either by opening ATM.ATM_A.C.atm_sm.stateDiag diagram file or by double-clicking on the statemachine directly. The statemachine contains three states: initial state, idle and active, and four transitions: init, insertCard, ejectCard and Transaction. 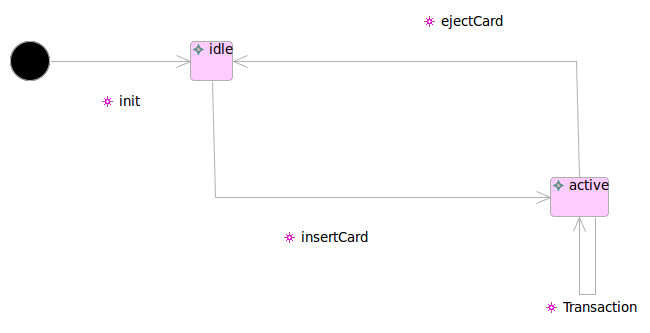 When translated to Event-B the transitions become ATM_A machine's events of the same names. The states are translated differently depending on the translation type and class-lifting property of the container statemachine. In our case the functional translation is specified, which you can see from the properties view of statemachine, so the states are translated into a single function (information about the states is contained in a function variable, see UML-B details). The translated ATM_A EventB machine is available from corresponding ATM.eventB project. 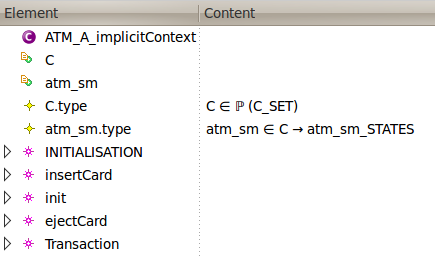 Now to animate the abstract statemachine atm_sm you need to

Note: Try multiple-selecting other diagrams, for instance class diagram ATM.ATM_A.classDiag. You will notice that Animate action is not available - it only appears when all the elements in the selection are statemachine diagrams. 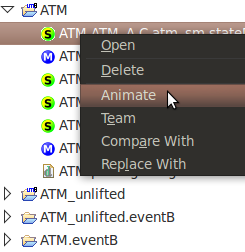 After you initialise the animation the tool first switches to ProB perspective and shows its views, reads selected UML-B statemachine diagram files and creates a corresponding animation diagram for each of them. The animation diagrams are then opened and ProB starts to run its animator on the container machine.

Note: In fact the animation plug-in is implemented on a different model, which is a small subset of the UML-B model. When an animation diagram is opened a specific animation resource is created for it on the workspace in the same project folder as animated statemachines. These resources are only used during the animation process, but remain there until removed either manually or using a "Clean all animation output resources" button.

Tip: If you are not satisfied with the automatic layout of the animation diagram it is possible to change it manually: the diagram elements can be moved with a mouse, as well as transitions can be bended. Deletion of the elements however is forbidden.

As it was mentioned before, the animation tool works in combination with ProB animator. It actually starts ProB animator and uses it's output to update the animation diagrams, but on the other hand it also drives the animator when actions are made on the diagram elements. In other words it works as an interface between the UML-B and ProB, delivering the existing functionality of ProB to UML-B. In this context the statemachine animation is only an aid to ProB animation, which will become more obvious in the next step.

When the animation has started, from ProB's Operations view it can be seen that the only available operation is "$initialise_machine" - the ProB is awaiting to initialise all the machine's variables and constants with initial values. This is one of the cases where statemachine animation flow is strictly limited to using the ProB. To continue the animation 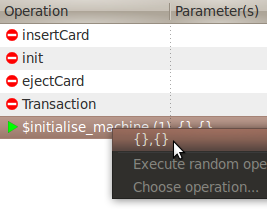 Straight after the machine is initialised we should notice some changes on the animation diagram: the init transition has become bold, which means it was enabled. As the init transition has a corresponding EventB event in the ATM_A machine, the Operations view will also show that this event is now enabled. Now at this point the class-lifting property comes into scene as init event creates instances of the class C.

Note: When you click on a transition the tool actually calls a corresponding ProB operation, which is also available from Operations view. If the operation has parameters, a selection pop-up menu appears to let you choose one of them, as you have seen in the previous step, otherwise the operation is called automatically.

After we have created an instance C_SET1 of class C it appears on the diagram as a token inside the "idle" state. The state itself has also changed its appearance and now is highlighted. This means that instance C_SET1 is in the "idle" state now and this state is active i.e. it contains one or more instances. A single instance can only be in one state at a time, however many instances can be in a single state. Another change you should notice is that "insertCard" transition becomes enabled. If you are curious enough to click on it you can see from the parameter selection menu that this transition is enabled for the newly created instance C_SET1. It doesn't mean however that any outgoing transition from active state is automatically enabled for any instance in that state - it is the EventB model implementation that specifies the behaviour of a corresponding event.

So we should have two ATMs now: C_SET1 and C_SET2, both in the "idle" state. To test them let's insert a card into one of the ATMs

After the card is inserted into C_SET1 you can see that instance token C_SET1 has moved to the "active" state. The "Transaction" and "ejectCard" transitions become enabled for this instance as well. To model a standard ATM use case let's make a transaction on C_SET1

Note: As we have inserted a card into one ATM, the transaction is available for this ATM only, which you can see from the pop-up menu - it contains a single option C_SET1. Despite of a single option the pop-up menu still appears and waits for user to select a parameter. This lets you see what parameters does a transition take: you don't have to select an option after you have clicked on a transition and caused a menu to appear. As it was mentioned above, the only case when menu doesn't appear and linked ProB operation is called automatically is when it has no parameters at all. 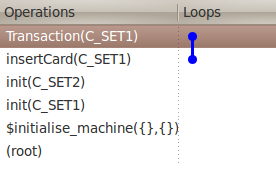 After the transaction is done let's eject the card from the ATM we operated with. This is modelled by the "ejectCard" transition

You can see now that the card has been ejected from the ATM C_SET1 and instance token C_SET1 has moved back to the "idle" state. The diagram looks similar to the one when both ATMs were just created, however if you check the History view of ProB you will see the record of all the operation we have made so far: we have created two instances of class C that modelled ATMs, inserted a cards into one of them, made a transaction on it and ejected the card.

Tip: ProB not only allows you to see the history of called operations, but also to go back in time: to double-click on an specific operation in history and go to that state. The animation tool supports this feature and updates the diagram accordingly, so if for instance you double-click on the Transaction(C_SET1) in History view, you will go back to a state when we have made a transaction on C_SET1.

In this tutorial we have followed a short use case scenario of animating a statemachine diagram of a simple UML-B model. In addition to the features showed in the tutorial the animation plug-in supports multiple statemachine diagram animation, for which you need to select several diagram files before calling the animation. Each diagram will be opened in a separate editor, allowing you to layout them at your preference. The animated statemachines are also not restricted to a single refinement of a machine - you can select the diagrams from different refinement levels and call the animation on them.