The Use of Theories in Code Generation

The theory plug-in is used to add mathematical extensions to Rodin. The theories are created, and deployed, and can then be used in any models in the workspace. When dealing with implementation level models, such as in Tasking Event-B, we need to consider how to translate newly added types and operators into code. We have augmented the theory interface with a Translation Rules section. This enables a user to define translation rules that map Event-B formulas to code.

Code generation rules are specified in a theory file, which is created using the Theory plug-in. Figure 1 shows a pretty print of some of the translations rules that have been specified for the Ada code generator. In the figure we can see that the theory is given a name, and may import some other theories. Type parameters can be added, and we use them here to type the meta-variables. For instance, the meta-variable a is restricted to be an integer type, but meta-variable c can be any unspecified type, Q. Meta-variables are used in the translator rules for pattern matching. 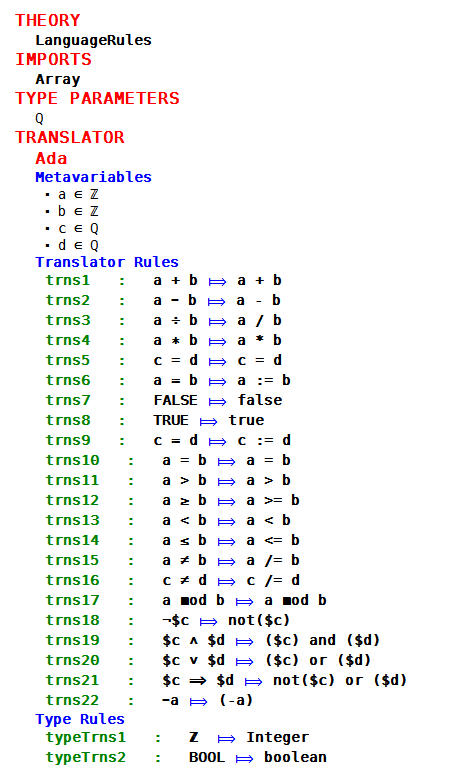 Translator rules are templates. They are used in a pattern matching algorithm, in the Theory plug-in, invoked by the code generator. Event-B formulas are defined on the left hand side of the rule, and the code to be output (as text) appears on the right hand side of the matching rule. During translation an abstract syntax tree (AST) representation of the formula is used. The theory plug-in attempts to match the formulas in the rules with each syntactic element of the AST. As it does so it builds the textual output as a string, until the whole AST has been successfully matched. When a complete tree is matched, the target code is returned. If the AST is not matched, a warning is issued, and a string representation of the original formula is returned.

The type rules section, shown in Figure 1, is where the relationship is defined, between Event-B types and the type system of the implementation.

When we are working at abstraction levels close to the implementation level, we may make an implementation decision which requires the introduction of a new type to the development. We give an example of our approach, where we add a new array type, shown in Figure 2, and then define its translation to code. 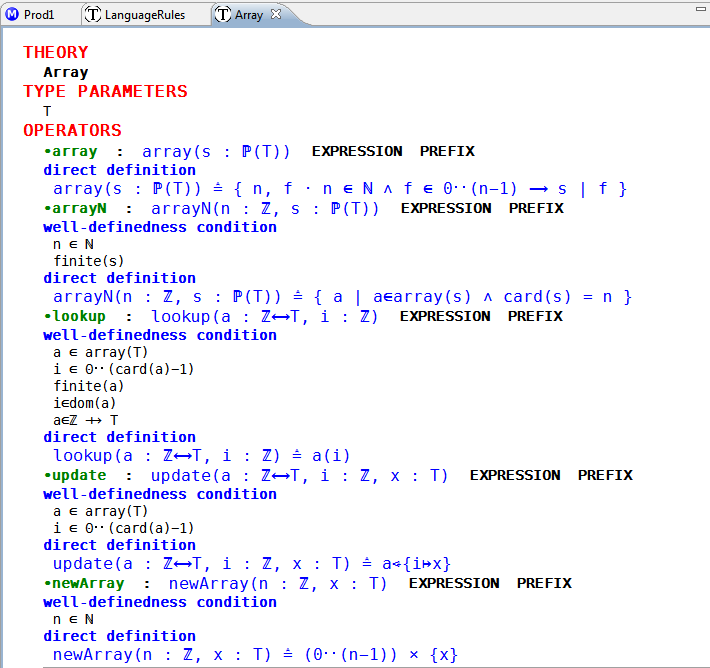 The array operator notation is defined in the expression array(s: P(T)); and the semantics is defined in the direct definition. arrayN constrains the arrays to be of fixed length. Array lookup, update, and constructor operators are subsequently defined. In the next step we need to define any translations required to implement the array in code.

Figure 3 shows the Ada translation; beginning with the meta-variable definitions that are used for pattern matching in the translation rules. Each of the operators; newArray, and update, and an expression using the lookup operator, are mapped to their implementations on the right hand side of the rule. The Type Rules section describes the implementation's description of the arrayN type.