The Modularisation plug-in provides facilities for structuring Event-B developments into logical units of modelling, called modules. The module concept is very close to the notion Event-B development (a refinement tree of Event-B machines). However, unlike a conventional development, a module comes with an interface. An interface defines the conditions on how a module may be incorporated into another development (that is, another module). The plug-in follows an approach where an interface is characterised by a list of operations specifying the services provided by the module. An integration of a module into a main development is accomplished by referring operations from Event-B machine actions using an intuitive procedure call notation.

Please see the Modularisation Plug-in Installation Instructions for details on obtaining and installing the plug-in.

The Modularisation Plug-in Tutorial page is currently in preparation.

This is teaching material for those wishing to learn about the Modularisation plugin. It includes a development and detailed explanatory slides.

There is a dedicated page for Modularisation Integration Issues.

There are three major approaches to decomposition. One is to identify general theory that, once formally formulated, would contribute to the main development. For instance, a model realising a stack-based interpreter could be simplified by considering the stack concept in isolation, constructing a general theory of stacks and then reusing the results in the main development. An imported theory of stack contributes axioms and theorems assisting in reasoning about stacks.

Another form of decomposition is splitting a system into a number of parts and then proceeding with independent development of each part. At some point, the model parts are recomposed to construct an overall final model. This decomposition style relies on the monotonicity of refinement in Event-B although further constraints must be satisfied to ensure the validity of a recomposed model.

Finally, decomposition may be realised by hierarchical structuring where part of a an overall system functionality is encapsulated in some self-conatined modelling unit embedded into another unit. The distinctive characteristic of this style is that recomposition of happens at the same point where model is decomposed.

There are a number of reasons to try to split a development into modules. Some of them are: 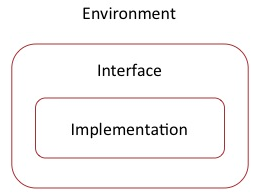 General depiction of a module/interface/environment structure

While a speciﬁcation based on a single module may be used to describe fairly large systems such approach presents a number of limitations. The only speciﬁcation structuring mechanism of module is the notion of event. A sufficiently detailed model would correspond to a module with a substantial number of events. This leads to the scalability problems as the number of events and actions contained in them is linearly proportional to the number of proof obligations. Even more important is the requirement to a modeller to keep track of all the details contained in a large module. This leads to the issue of readability. A large speciﬁcation lacking multi-level structuring is hard to comprehend and thus hard to develop. These and other problems are addressed by structuring a speciﬁcation into a set modules. The modules comprising a model are weaved together so that they work on the same global problem. In addition to the improved structuring and legibility, the structuring into multiple modules permits the separation between the model of a system and the model its environment. As a self-contained piece of speciﬁcation, a module is reusable across a range of developments. A hypothetical library of models would facilitate formal developments through the reuse of ready third-party designs. To couple two modules one has to provide the means for a module to beneﬁt from the functionality of the another module. A module interface describes a collection of externally accessible operations ; interface variables permit the observation of a module state by other modules.

Module interface allows module users to invoke module operations and observe module external variables. Construction of a system of modules requires the ability to integrate the observable behaviour and operations of a module into the speciﬁcation of another module. Organising modules into a ﬁtting architecture is essential for realisation of a large-scale model. 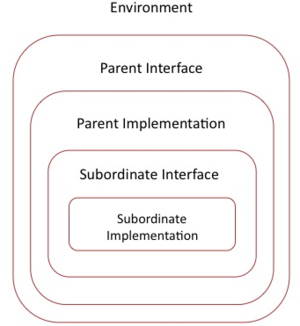 An operation call, although potentially involving a chain of requests to the nested modules, is atomic. An operation call is expressed by including a function, corresponding to the called service, into a before-after predicate expression calculating a new module state. For example, to compute the sum of the results produced by two subordinate modules, one could write

are the operation names provided by the modules m and n. Names m and n are the qualifying preﬁxes of the corresponding subordinate modules. The arguments to an operation call declared with formal parameters are supplied as a list of values computed on the current combined state of the parent and subordinate modules. For instance, an operation call sub computing the diﬀerence of two integer values, can be used as follows:

During internal detalisation, a module is considered in isolation from the rest of a system. Module events and its state are reﬁned preserving the externally observable state properties and operation interfaces. Once the reﬁnement relation is demonstrated for a given module, its abstraction can be replaced with a reﬁned version everywhere in a system. Such replacement does not require changes in other modules. An important consequence is the possibility of independent module detalisation in a system constructed of several modules. During the internal detalisation, operation pre-condition may be weakened, post-condition may be strengthened and the external part of the invariant may be strengthened as well. There are limits to this process, such as a requirement of an operation feasibility (post-condition must describe a non-empty set of states) and non-vacuous external invariant. 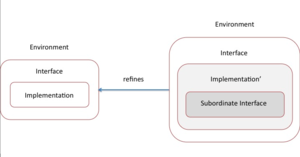 One way to reﬁne a module functionality and its state is by an inclusion of an existing module (that may exists only in the form of an interface at that point). Addition of a subordinate module extends a module state with the external variables of the subordinate and the changes to the newly added state are accomplished through operation calls. The module invariant and action parts must be extended to link with the state of the included subordinate module. Although a module is added as a whole and at once, the parent part could evolve through a number of reﬁnement steps to a make a full use of the interface of the included module. An existing subordinate module may be replaced with a module implementing a compatible interface. A replacement module body is not necessarily a reﬁnement of the original module. The interface-level compatibility ensures that a parent module is not aﬀected in a detrimental way by a module change. 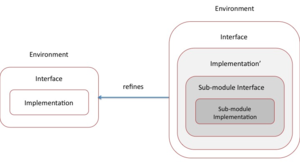 In a case when composition with an existing module seems a ﬁtting development continuation but there is no suitable existing module, a new module may constructed by splitting a module state and functionality into two parts. Such process is called module decomposition and is realised by constructing and including a new module into a decomposed module in such a manner that the result is a reﬁnement of the original module. The main decision to make when decomposing a module is the set of variables that are going to be moved into a new subordinate module. A linking invariant would map the combined states of the parent and subordinate modules into the original module state. The actions updating variables of the subordinate module are reﬁned into operation calls. In this manner, the variable partitioning decision and reﬁnement conditions on a decomposed module shape the interface of the subordinate module.

To prove the correctness of a module decomposition it is enough to demonstrate the reﬁnement relation between the non-decomposed and decomposed module versions. The parent module interface of the decomposed version must be compatible with the original module interface.

An interface is a new type of Rodin component. It similar to machine except it may not define events but rather defines one a more operations. Like a machine, an interface may import contexts, declare variables and invariants.

An operation definition is made of the following parts: 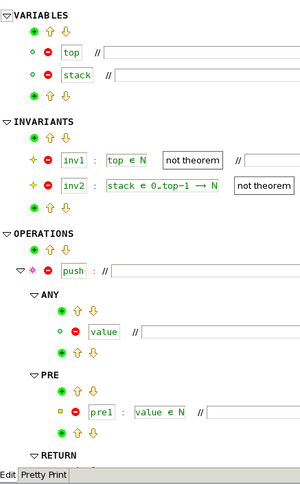 An interface has no initialisation event. It is an obligation of an importing module to provide a suitable initial state.

The following is an example of a very simple interface describing a stack module. It has two variables - the stack top pointer and stack itself, and two operations: push and pop.

The interface editor is based on the platform composite editor and follows the same principles and structure.

To benefit from the services provided by a module one imports a module into a machine. The plug-in provides machine syntax extension for importing modules into a machine.

Prefix is a string literal used to emulate a dedicated namespace for each module. It has the effect of changing the names of all the imported elements by attaching the specified prefix string. The second parameters of Uses is a name of an interface component.

To import a module one has to know its interface. Only arriving at the implementation stage one cares to collect all the relevant module implementations and assemble them into a single system. During the modelling stage, the focus is always on a particular module. Thus, several teams may work on different modules simultaneously. 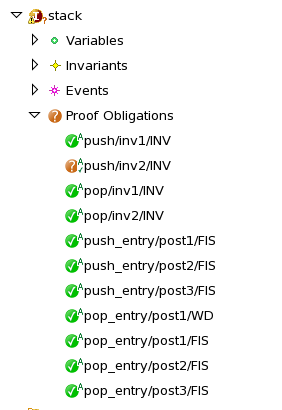 This is what happens when importing a module -

Imported interface variables may be used in invariants, guards and action expressions. They may not, however, be updated directly in event actions. The only way to change a value of an interface variable is by calling one of the interface operations.

The only place where an imported operation may appear is an action expression. Since it is a state updating relation it may not be a part of a guard or invariant.

To integrate a service provided by an imported module into a main development, event actions are refined to rely on the newly available functionality of an imported module. Interface operations are added into expression with a syntax resembling a operation call: 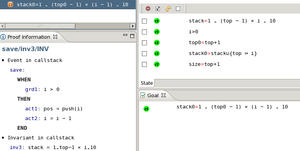 Operation pre- and post-conditions are used to describe the operation call in a proof obligation.

There no limit on the way operation calls may be composed (subject to typing and verification conditions) although proof obligation complexity could make it impractical having many nested calls. The following is an event saving number from i to 0 in a stack:

Implementing a module is similar to constructing a refinement of a machine. The formal link between a machine and an interface is declared using the new Implements clause:

Like in refinement, the variables and constants of interface are visible to an implementing machine. However, unlike module import, this time interface variables play the role of abstract variables.